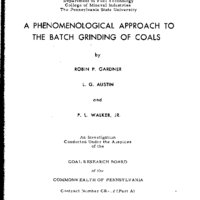 A PHENOMENOLOGICAL APPROACH TO THE BATCH GRINDING OF COALS

Special Research Report SR-23 The way in which coal particles break upon grinding is of importance in determining the properties of the end product. The particle size distribution of coal following grinding affects its behavior in combustion, sintering, coking, and gasification operations, among others. In this study, approaches have been developed which make it possible to describe clearly the breakage mechanism of coal. The principles involved J:iave been demonstrated for two anthracites and one bituminous coal when ground in a standard Hardgrove grindability machine. The grinding process has been described on the basis of a selection function and a distribution function. The selection function S(x) gives the fraction by weight of the coal particles of a particular size x which is broken per revolution of the grinding machine, The distribution function B(y, x) gives the size distribution of the products of breakage in terms of the fraction by weight of the product produced less than any arbitrary size y smaller than the original particle of size x. After determining .these functions, as described in the report, it is possible to calculate what the size distribution will be for each coal (of some known initial size distribution) following a selected number of revolutions of the grinding machine. These calculated size distributions are found to agree well with those found experimentally by screening the final product. The selection functions of the two anthracites were found to be directly dependent on particle size but independent of grinding degree, The bituminous coal was dependent upon both particle size and grinding degree. It exhibited selective grinding of the sizes above 420 microns after about 40 revolutions in the Hardgrove machine. The lack of selective grinding in the case of the anthracites is interpreted to mean that the carbon phase and mineral phase have nearly similar degrees of grindability. For the bituminous coal, on the other hand, it appears that the carbon phase is easier to grind than the mineral phase,