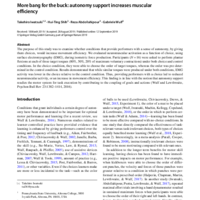 More bang for the buck

The purpose of this study was to examine whether conditions that provide performers with a sense of autonomy, by giving them choices, would increase movement efficiency. We evaluated neuromuscular activation as a function of choice, using surface electromyography (EMG), during isometric force production. Participants (N = 16) were asked to perform plantar flexions at each of three target torques (80%, 50%, 20% of maximum voluntary contractions) under both choice and control conditions. In the choice condition, they were able to choose the order of target torques, whereas the order was pre-determined in the control condition. Results demonstrated that while similar torques were produced under both conditions, EMG activity was lower in the choice relative to the control condition. Thus, providing performers with a choice led to reduced neuromuscular activity, or an increase in movement efficiency. This finding is in line with the notion that autonomy support readies the motor system for task execution by contributing to the coupling of goals and actions (Wulf and Lewthwaite, Psychon Bull Rev 23:1382–1414, 2016).