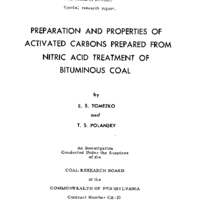 Special Research Report SR-28 The preparation and properties of low ash activated carbons from a Pennsylv~nia high volatile bituminous coal have been investigated. The conversion of raw coal to such carbon was carried out in three steps. These are (1) the oxidation of the raw coal to humic acids by air and nitric acid followed by separation of the mineral matter with solvent extraction of the acids, (2) the py~olysis of the acids to chars at 230°C and 1 and 135 atmospheres nitrogen pressure, and (3) the steam activation of the chars at temperatures from 750° to 900°C. In the preparation of the chars, the humic acids exhibited a marked exothermic decomposition phenomenon at about 230°C. Esterification of the hydroxyl groups and reduction of the nitro groups decreased this decomposition considerably, suggesting that nitro groups are chiefly responsible for this phenomenon with the possib1lity that the hydroxyl groups enhance the reaction, The chars were in an expanded friable form, appearing porous and consisting of a mixture of agglomerated and non-agglomerated particles. Separation of the mixture by hand gave hard silvery-grey particles resembling a coke and soft friable particles with an apparent glazed surface. The yield of char was approximately 503 of the raw coal of which about 603 was in the agglomerated form. Increase of pyrolysis pressure from 1 to 135 nitrogen atmospheres increased both the yQeld of char and the agglomerated fraction, indicating that internal gas pressure is important in the formation of this fraction. Steam treatment of the chars gave activated carbons with yields ranging from approximately 20 to 303 for the agglomerated fraction and from 11 to 163 for the non-agglomerated fraction based on the raw coal. Evaluation of the properties of these carbons for surface area,bulk density, pore volume, mercury density, and iodine and methylene blue adsorption has shown that the carbons have an essentially micropore structure. Based on their data, the properties of these carbons compare favorably for the most part with those of the commercial carbons, examined in this investigation.