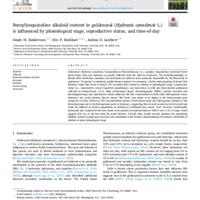 Goldenseal (Hydrastis canadensis, Ranunculaceae/Hydrastidaceae) is a popular Appalachian medicinal forest plant whose roots and rhizomes are mostly collected from the wild for commerce. The benzylisoquinoline alkaloids (BIA) berberine, canadine, and hydrastine are believed to be primarily responsible for the bioactivity of goldenseal. To provide a consistent, quality-focused product to consumers, a better understanding of factors that influence major BIA levels is needed. We examined BIA content in relation to phenological stage, reproductive status (i.e., reproductive versus vegetative morphology), and time-of-day in wild and forest-farmed goldenseal collected in Pennsylvania, U.S.A. High performance liquid chromatography (HPLC) analysis revealed that phenological stage and reproductive status influences the BIA concentration in both dried belowground (roots, rhizomes) and aerial portions (leaves, stems). BIA levels were found to be higher in the belowground parts compared to aerial. Moreover, BIA concentrations peaked in both plant aerial and belowground portions at the flowering stage and in the belowground parts at dormancy, suggesting that an early season harvest of aerial tops could be explored in farmed populations in addition to traditional late season “root” harvests. Additionally, hydrastine and canadine levels were found to be greatest in aerial portions at 1600 h over a 24 -h range, which suggests late day as the best time for aerial harvests. Overall, these results provide guidance for optimizing alkaloid content in goldenseal harvests and contributes to the broader understanding of secondary metabolite in relation to plant phenological stage.