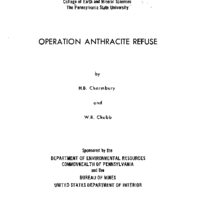 Special Research Report SR-94 The project "Operation Anthracite Refuse" was the result of a proposal submitted to the Coal Research Board of the Department of Mines and Mineral Industries (now the Department of Environmental Resources) in the Commonwealth of Pennsylvania by the Coal Research Section in the College of Earth and Mineral Sciences at The Pennsylvania State University. The Commonwealth in turn submitted the proposal to the U. S. Bureau of Mines for funding. The Bureau agreed to support the proposal and to provide ninety percent of the total amount if the Commonwealth would provide ten percent. The total cost was estimated at $135,113 a year for a three-year period. This did not include the contribu- tions made by the University in the form of direct and indirect costs. Based upon a final agreement, the project was started May 1, 1968. However, due to the nature of the results obtained, the series of tests that were made, the necessity of seasonal testing, and a turnover in research personnel, the project was not completed until December 31, 1972--four years and eight months. The total cost for the project was approximately $400,000 or about $5,000 less than the original estimated cost of $405,339.