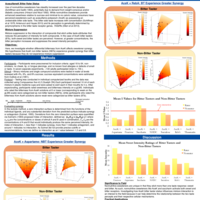 Use of nonnutritive sweeteners has steadily increased over the past few decades (Schiffman and Gatlin 1993, Ilback et al 2003), potentially due to demand from weight-conscious and/or diabetic consumers (Hinson and Nicol 1992). While nonnutritive sweeteners provide enhanced sweetness relative to sucrose and minimal-to-no caloric value, consumers have perceived sweeteners such as acesulfame potassium (AceK) as possessing an undesirable bitter side taste. This bitter side taste increases with concentration (Schiffman et al 1979; Antenucci and Hayes 2015) and its perception is genetically determined by polymorphisms in the bitter taste receptor genes, TAS2Rs (Allen et al 2013). Here, we investigate whether differential bitterness from AceK affects sweetener synergy. In binary mixtures of sweeteners, synergy occurs when two compounds together have a greater intensity than would be predicted from simple additivity of the sweetness from the individual compounds separately. In two preliminary studies, aspartame/AceK and fructose/AceK blends of varying concentrations were tested in water. In each, ~100 participants rated sweetness and bitterness using a general Label Magnitude Scale (gLMS), a 100 point scale with empirically derived semantic labels at various positions along the scale. Individuals who rated the bitterness from AceK solutions at 6 or lower (corresponding to weak on the gLMS scale) were categorized as non-bitter tasters (NBTs), while participants who rated the bitterness from AceK solutions above weak were categorized as bitter tasters (BTs). Results from the aspartame/AceK study found greater synergy in the NBT group, as might be expected from the absence of mixture suppression of sweetness by bitterness in these individuals. Unexpectedly, in the fructose/AceK study, we observed greater synergy in the AceK BT group. We are currently investigating additional pairs of sweeteners to resolve this contradiction.