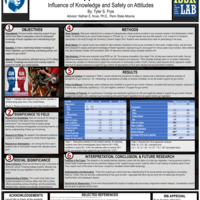 With an increase in incidents of mass shootings in recent years—some taking place in educational settings—questions have been raised about public access to “military-style” weapons and need for additional measures of gun control. To date though, scholarly work in this area has largely ignored perceptions of students in the Northeastern Region of the United States. Further, much of the prior work in this area has failed to control for measures of participants’ knowledge of firearms and understanding of current gun-related policies in prediction modeling. The goal of this project is to help fill these gaps in literature by assessing student perceptions of various forms of general gun control among a sample of undergraduate students enrolled in one university located in the Northeastern United States. Further, this work contributes to the available literature by exploring the impact of knowledge of gun functioning and firearm policies on support for gun control while also controlling for perceptions of campus safety and confidence in police. Results show that students were fairly neutral in their attitudes toward stricter gun control (M = 3.07). Interestingly, findings suggest that as perceptions of safety on campus increased, so too did student support for stricter forms of gun control (p<.10). Surprisingly, police confidence was unrelated to students’ attitudes toward firearm regulation. However, consistent with previous findings, exposure to firearms was a statistically significant (p<.01) and negative “predictor” of support for greater gun control. Similarly, as hypothesized, knowledge was statistically significant (p<.05) and negatively related to support for gun control. These findings suggest that students who understand gun functioning, and current firearm legislation, do not support stricter gun legislation. Potential policy implications are noted within.