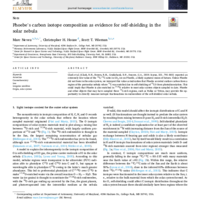 Clark et al. [Clark, R.N., Brown, R.H., Cruikshank, D.P., Swayze, G.A., 2019. Icarus, 321, 791–802] reported an extremely low value of the 12C/13C ratio in CO2 ice on Phoebe, a likely captured moon of Saturn. Unless Phoebe did not form in the solar system, we interpret this value as indication that Phoebe accreted surface carbon from a region of the protosolar nebula where 13C was enriched due to self-shielding of 12CO from photodissociation. This could imply that Phoebe is also enriched in 17,18O relative to most solar system objects sampled to date. Phoebe and other objects that may have sampled these 13C-rich regions, such as Pallas or Triton, may provide the opportunity to directly measure isotopic fractionations in endmembers of the self-shielded solar nebula.