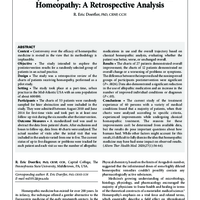 Trajectory of Patients Treated With Classical Homeopathy: A Retrospective Analysis

Context: Controversy over the efficacy of homeopathic medicine is rooted in the view that its methodology is implausible.

Objective: The study intended to explore the postintervention results for a randomly selected group of patients in an actual practice.

Design: The study was a retrospective review of the charts of patients receiving homeopathy, performed as a pilot study.

Setting: The study took place at a part-time, urban practice in the Mid-Atlantic USA with an area population of about 600 000.

Participants: The charts of 53 patients were randomly sampled for later abstraction and were included in the study. They were admitted between August 2010 and June 2014 for first-time visits and took part in at least one follow-up visit during the six months after the intervention.

Outcome Measures: A standardized tool was used to abstract the data from patients’ charts. After exclusions and losses to follow-up, data from 40 charts were analyzed. The actual number of visits after the initial visit that was included in the analysis varied from one to five. The current status of up to five diagnoses or problems were tracked for each patient and each visit as was the number of allopathic medications in use and the overall trajectory based on classical homeopathic analysis, evaluating whether the patient was better, worse, or unchanged overall.

Results: The charts of 27 patients demonstrated overall improvement; the charts of 12 patients demonstrated no overall change or a worsening of problems or symptoms. The difference between the improved and the nonimproved groups of participants postintervention were significant (P = .0026). Data also demonstrated a significant reduction in the use of allopathic medication and an increase in the number of improved individual conditions or diagnoses (P < .05).

Conclusions: The current study of the treatment experience of 40 persons with a variety of medical conditions found that a majority of patients, when their charts were analyzed according to specific criteria, experienced improvements while undergoing classical homeopathic treatment. The reasons for these improvements can’t be determined from available data, but the results do pose important questions about how humans heal. While other factors might account for this result, it’s difficult to fully dismiss the idea that homeopathic medicine may have had some impact on observed results.