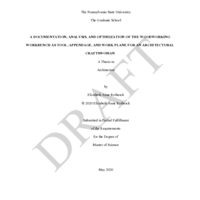 A DOCUMENTATION, ANALYSIS, AND OPTIMIZATION OF THE WOODWORKING WORKBENCH AS TOOL, APPENDAGE, AND WORK PLANE FOR AN ARCHITECTURAL CRAFTSWOMAN

Woodworking workbenches have evolved over time, from our earliest documented Roman Workbenches to more recent workbenches like the commercial Black and Decker Workmate of 1968, for use at home. Similar to any tool, throughout its history some components have remained, others have been modified, and some have been removed from the workbench menu entirely. By approaching the woodworking bench as an extension of the craftswoman’s body, it can be used to describe how the bench helps her in performing fundamental woodworking operations. This thesis analyzes historic woodworking workbenches and their parts to gain knowledge and draw design influence for the fabrication of a Case Study Workbench that is then used and altered throughout a series of woodworking sessions. Each woodworking session concentrates on a fundamental woodworking technique or operation taken from Tage Frid’s instructional book series Tage Frid Teaches Woodworking (1979). Ten woodworking sessions culminate in a woodworking project, a chisel cabinet, which incorporates the ten different operations and various techniques performed. Each operation performed on the bench is recorded, documented and analyzed – showing how the tool moves in relation to material and bench space, how the craftswoman moves in relation to the work and the bench space, and critiques the workbench in relation to the operation. The thesis reveals how these operations inform the workbench as a tool, appendage, and work plane for the craftswoman, and evaluates the effectiveness of the Case Study Workbench and it’s alterations as an alternative to historic (male body centric) bench models. Through documentation of a craftswoman performing woodworking, this research also focuses on addressing and breaking down the historical influence of the standard male figure in determining the size/shape/features of the woodworking bench. The selection of a craftswoman and area of woodworking along with the isolation of the Case Study Workbench allows the bench to tell how it was used and changed throughout the research, helping to find the crucial points of the workbench that must be customized to cater to the craftswoman and her tools. Historical analysis and a basic knowledge of woodworking with hand tools informed the design of the Case Study Workbench, originating as a simple structure and work plane. The result of the modifications is a woodworking workbench that is directly informed by the craftswoman’s body, the material, and the tool and the way in which these three relate to each other, to produce a more efficient, custom, and comfortable workbench for woodworking. | Thesis Statement | Performing essential woodworking operations on a workbench, recording those operations, and analyzing the movements of the craftswoman’s body reveal the unifying relationship between the body and the bench. The documentation of modifications and movements are customized to the craftswoman working at the bench, but can be translated to another craftsperson to understand the unifying relationship of the body (its measure, stature, strength, and reach) to the workbench. The workbench was modified to something custom to the craftswoman, where her body was accommodated and aided in her performance of woodworking operations at the workbench. The resultant workbench was a bench that had customized holding devices and a place for the craftswoman to occupy the same space as the workbench. Exploring the relationship of the body, bench, and material helped to develop a custom tool, appendage, and work plane for the craftswoman.