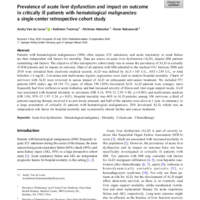 Patients with hematological malignancies (HM) often require ICU admission, and acute respiratory or renal failure are then independent risk factors for mortality. Data are scarce on acute liver dysfunction (ALD), despite HM patients cumulating risk factors. The objective of this retrospective cohort study was to assess the prevalence of ALD in critically ill HM patients and its impact on outcome. Data of all patients with HM admitted to the medical ICU between 2008 and 2018 were extracted from electronic medical records. ALD was defined by ALT > 165 U/L, AST > 230 U/L, or total bilirubin > 4 mg/dL. Univariate and multivariate logistic regressions were used to analyze hospital mortality. Charts of survivors with ALD were reviewed to assess impact of ALD on subsequent anti-cancer treatment. We included 971 patients (60% male), age 64 (54–72) years, of whom 196 (20%) developed ALD. ALD patients were younger, more frequently had liver cirrhosis or acute leukemia, and had increased severity of illness and vital organ support needs. ALD was associated with hospital mortality in univariate (OR 4.14, 95% CI 2.95–5.80, p < 0.001) and multivariate analysis (OR 1.86, 95% CI 1.07–3.24, p = 0.03). Hospital mortality was 46% in ALD patients; among 106 survivors, a third of patients requiring therapy received it as previously planned, and half of the patients were alive at 1 year. In summary, in a large population of critically ill patients with hematological malignancies, 20% developed ALD, which was an independent risk factor for hospital mortality and occasionally altered further anti-cancer treatment.