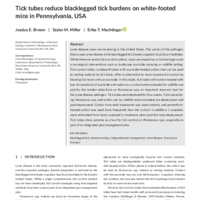 Lyme disease cases are increasing in the United States. The vector of the pathogen that causes Lyme disease is the blacklegged tick (Ixodes scapularis Say) (Acari:Ixodidae). While there are several tick control options, many are expensive or involve large-scale or ecological interventions such as landscape acaricide spraying or wildlife baiting. Tick control tubes, cardboard tubes with acaricide-treated cotton that can be used as nesting material by tick hosts, offer an alternative to more invasive tick control by treating tick hosts with an acaricide. In this study, tick tubes with cotton treated with two formulations of acaricide and water as a control were evaluated for wildlife use and for tick burden reductions on Peromyscus spp. an important reservoir host for the Lyme disease pathogen. Tick tubes were deployed for four weeks. Ticks parasitizing Peromyscus spp. and cotton use by wildlife were evaluated pre-deployment and post-deployment. Cotton from both treatments was used similarly, and permethrintreated cotton was used more frequently than the control. In addition, I. scapularis were eliminated from hosts captured in treatment plots post-tick tube deployment. Tick tubes show promise as a tool for tick control on Peromyscus spp., especially as part of an integrated pest management plan.