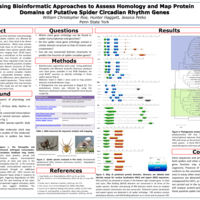 Internal biological clocks allow organisms to adjust their behavior and physiology to the external environment. While circadian (daily) rhythms are affected by environmental stimuli (such as light, temperature...etc.), they tend to be driven by a conserved set of endogenous molecular mechanisms.  While most animals use these innate controls to follow a daily period close to 24 hours without environmental time cues (constant darkness), spiders have species specific daily periods that deviate significantly from this norm ranging from 18-29 hours. Differences in the molecular clockwork could be a contributor to the variation observed in spider periods. While the identity and function of circadian regulators in insects have been well characterized, these regulators have not yet been studied in spiders.  The goal of this study was to identify putative circadian regulators in spiders and to analyze and compare domain structures of these proteins to their orthologs in other invertebrates. Using bioinformatic approaches, we identified spider orthologs for six central circadian rhythm regulatory proteins. Domain structures were comparable between spiders, insects, and crustacean orthologs, however some differences were observed in location and number of nuclear localization and export sequences.  These results support the existence of an ancestral circadian clock pathway that may function similarly in spiders as in other invertebrates.  This study has set the stage for future functional analyses of these proteins in vitro and in vivo.