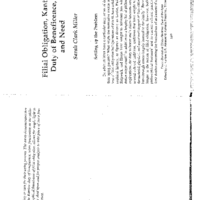 Do adult children have a particular duty, or set of duties, to their aging parents? What might the normative source and content of filial obligation be? This chapter examines Kant’s duty of beneficence in The Doctrine of Virtue and the Groundwork, suggesting that at its core, performance of filial duty occurs in response to the needs of aging parents. The duty of beneficence accounts for inevitable vulnerabilities that befall human rational beings and reveals moral agents as situated in communities of dependence and mutual aid. Other accounts of filial obligation, such as those based on a notion of gratitude, virtue, or friendship, generate various difficulties and fail to adequately address and emphasize four morally significant features of the adult child/ aging parent relationship. First, the relationship between adult children and their aging parents is one of dependency created by the increasing frailty and need of those parents. Second, the obligations that adult children have to aging parents take place in the context of a relationship not voluntarily assumed, but not coerced. Third, given a cultural tendency toward paternalistic care of elderly individuals, the content of filial obligation should safeguard against such treatment. Fourth, because dependency relations between adult children and aging parents can involve an immense degree of sacrifice on the part of the caretaker, an acknowledgment of duties should be accompanied by a concurrent acknowledgment of the necessary limitation of duties. Addressing these four issues is essential in offering a coherent account of the normative source, content, nature, and scope of adult children’s duty to care for their aging parents. This essay demonstrates that the Kantian duty of beneficence, when functioning as the philosophical foundation of filial obligation, allows for ample light to be shed upon and for proper analysis to take place of these four issues.