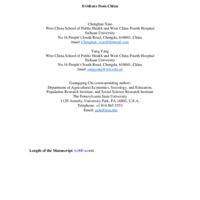 Does the mental health of migrant workers suffer from long commute time? Evidence from China