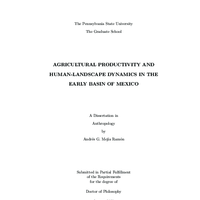 Despite over a century of archaeological research, fundamental aspects of Teotihuacan's subsistence base and economy remain unverified or untested assumptions. This includes the city's agricultural strategies in terms of preferred crops, water management strategies, and distributional networks. Moreover, most previous estimates of the maximum carrying capacity of the Teotihuacan Valley suggest that the city would not have been able to produce sufficient food to sustain itself. In this dissertation, I provide a novel ethnoecological and agroecological model for the interaction between Ancient Teotihucano society and their agricultural landscape. I first argue that rain was fundamental to Teotihuacano agriculture, ideology, political legitimacy, and urban planning contrary to an assumption that permanently-irrigated maize was the principal agricultural strategy in the valley. Though I remain unable to discount the possibility of spring-fed systems providing some amount of food, I document the existence of tiered, large-scale floodwater catchment systems across the Southern and Central Teotihuacan Valley including the Street of the Dead itself. Furthermore, through epigraphic, architectural, iconographic, ethnohistoric, etymological, remotely-sensed, and archaeoastronomic evidence I demonstrate that Ancient Teotihuacan performed a mountaintop rain-petitioning ritual at the Sanctuario de Tlaloc (TE-CL-100) site at summit of the Cerro del Patlachique, similar to those of the Aztec at Mount Tlaloc and the volcano shrines. Having demonstrated that rain was central to Teotihuacan, I question what the purpose of gathered rainwaters were given that they would come at the wrong time to allow for maize agriculture. I explore the potential agroecological niches fulfilled by various Mesoamerican crops including amaranth, beans, and maguey, re-estimating the carrying capacities of the Basin of Mexico and Teotihuacan Valley using productivity data from the 1960 Mexican Agricultural Census. I argue on evolutionary grounds that Mesoamerican human-plant interactions tend to favor more-diverse subsistence strategies than are typically modeled, demonstrating the increased yields that could result from such mixed strategies. I further investigate the sensitivity of maximum yields to changing climate finding drought to be a minimal risk so long as temperatures increase reducing risk to seed crops and maximizing maguey productivity. To test whether settlement was distributed in the Basin of Mexico in such a way as to be able to produce sufficient food, I develop a novel cost-distance analytical approach and associated R statistical library rooted in energetics and the principles of mechanics. I find evidence for increasing population pressure on the productive capacity of the Basin of Mexico during the Terminal Formative and Teotihuacan periods. During the existence of Teotihuacan, the city's expected caloric shortfall would be more than enough to offset any idealized surpluses at every other settlement in the basin. I propose a number of potential explanations to this observed disparity which nevertheless suggest a fundamental problem in how the current scholarly consensus conceptualizes subsistence, population, or settlement in the pre-Toltec Basin of Mexico.