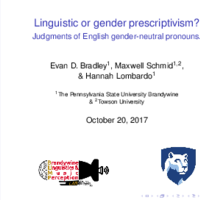 The lack of a true gender-neutral personal pronoun in standard English has led to numerous attempts to reform the language, most of which have had limited success. In the past, some style guides prescribed ‘he’ for a generic person, which is today seen as sexist. Alternatives like ‘he or she’ have been criticized for assuming a gender binary. Singular/epicene ‘they’ has a long history, but has drawn criticism from prescriptivist grammarians. Newly coined pronouns have not gained wide use. Is this resistance driven by strict adherence to grammar rules (e.g., “‘they’ is plural”) or by attitudes about gender which are at odds with the goals of the linguistic change itself (e.g., “there are two genders”)? To understand factors driving resistance to or acceptance of gender-neutral language, we asked English speakers to rate the grammaticality of sentences containing gender-neutral phrasings and non-standard uses of gendered pronouns, including ‘he or she’, singular ‘they’ (for generic and specific referents), ‘it’, and ‘ze’. Personality has been linked to reactions to grammatical and spelling errors, so participants also completed the Big Five inventory. The Gender Role Attitudes Scale assessed endorsement of sexist attitudes and binary gender norms. Singular ‘they’ is acceptable to most English speakers when referring to hypothetical persons of unknown gender. ‘They’ referring to specific individuals of unknown/non-binary gender is less grammatical, but the degree of acceptability depends on the rater’s personality and gender attitudes: those who are more extraverted rate specific ‘they’ as less grammatical, and those with more transcendent gender attitudes rate it as more acceptable. Alternatives like ‘ze’ are less grammatical, regardless of gender attitudes. The results suggest that resistance to gender-neutral language (especially that which challenges a binary) may be driven as much by attitudes about gender as by linguistic conservatism. Selected References Balhorn, M. (2004). The rise of epicene they. Journal of English Linguistics, 32(2), 79–104. Boland & Queen. (2016). If You’re House Is Still Available, Send Me an Email: Personality Influences Reactions to Written Errors in Email Messages. PloS one, 11(3), e0149885. Ekehammar & Akrami (2007). Personality and Prejudice: From Big Five Personality Factors to Facets. Journal of Personality, 75(5), 899–926. García-Cueto, et al. (2015). Development of the gender role attitudes scale (GRAS) amongst young Spanish people. International Journal of Clinical and Health Psychology, 15(1), 61-68. John & Srivastava (1999). The Big Five trait taxonomy: History, measurement, and theoretical perspectives. Handbook of Personality: Theory and Research, 2, 102–138.