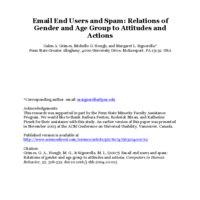 As the problem of spam email increases, we examined users’ attitudes toward and experience with spam as a function of gender and age. College-age, working-age, and retirement-age men and women were surveyed. Most respondents strongly disliked receiving spam yet took few actions against it. There were fewer gender differences than predicted, but age was a significant predictor of several responses. Retirement age men rated themselves as significantly lower in expertise than did working age men, and the oldest and youngest age groups took fewer actions against spam, used the computer less often, and spent fewer hours online than did the working age respondents. Older respondents were more likely than younger ones to report making a purchase as a result of a spam email and received the same amount of spam as other age groups in spite of lower overall use of the computer. The results suggest both that older computer users may be more vulnerable to spam, and that the usability of email for all users may be threatened by the inability of users to effectively take action against spam.