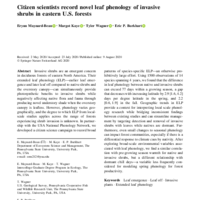 Invasive shrubs are an emergent concern in deciduous forests of eastern North America. Their extended leaf phenology (ELP)—earlier leaf emergence and later leaf off compared to native shrubs and the overstory canopy—can simultaneously provide photosynthetic benefits to invasive shrubs while negatively affecting native flora and fauna through producing novel understory shade when the overstory canopy is leafless. However, phenology varies geographically, and the degree to which ELP from local-scale studies applies across the range of forests experiencing shrub invasion is unknown. In partnership with the USA National Phenology Network, we developed a citizen science campaign to record broad patterns of species-specific ELP—an otherwise prohibitively large effort. Using 1500 observations of 14 species spanning 4 years, we found that the difference in leaf phenology between native and invasive shrubs can exceed 77 days within a growing season, a gap that decreases with increasing latitude by 2.9 [1.6, 4.2] days per degree latitude in the spring, and 2.2 [0.6, 1.9] in the fall. Geographic trends in ELP provide a context for interpreting local scale phenology research while bridging inconsistent findings between existing studies and can streamline management by targeting detection and removal of invasive shrubs with leaves while natives are dormant. Furthermore, even small changes to seasonal phenology can impact forest communities, especially if there is a differential response to climate cues by nativity. After exploring broad-scale environmental variables associated with leaf phenology, we find a similar correlation with pre-growing season warmth for native and invasive shrubs, but a different relationship with dormant chill days—a variable less frequently considered for modeling spring phenology for forest productivity.