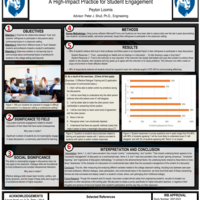 Trust and Controversial Topics in the Classroom

This project examines the relationship between “trust” and students’ willingness to participate in discussions about controversial topics in a classroom setting. It is widely acknowledged that a significant percent of students do not meaningfully engage in class discussions— a commonly used format for learning. Utilizing survey methodology, we assess methodologies to increase student engagement in class discussions that involve real or perceived or emotional risk. Students must learn how and when to deal with controversy in the academic setting and beyond. Therefore, this project examines engagement related to student expression of their ideas, especially, those that may have social consequences. This work began in 2017 when an engineering professor, at Penn State Altoona, questioned whether or not his students' level of trust in him, determined how they participated in class. He began by asking his student’s, at the end of the semester, what he could do differently to help them feel more comfortable, especially when talking about Controversial Topics in the classroom. Since then, we have created an IRB approved survey to deploy at the beginning and end of each semester to measure different areas in the college classroom setting, including trust (between peer-peer and peer-professor), effective dialogue, class participation, and controversial topics in the classroom. We have found that each of these overarching themes are inter-connected and deeply rooted in a student’s morals, ethics, and upbringing (from childhood-college). Though this research and it’s results thus far have been curated almost solely from engineering student’s, we plan to broaden our population to other disciplines in the coming year. We also plan to create a survey specifically for higher-education teachers, in regards to their thoughts and opinions of how trust impacts their student's participation and the way they run their classroom.