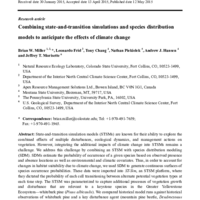 State-and-transition simulation models (STSMs) are known for their ability to explore the combined effects of multiple disturbances, ecological dynamics, and management actions on vegetation. However, integrating the additional impacts of climate change into STSMs remains a challenge. We address this challenge by combining an STSM with species distribution modeling (SDM). SDMs estimate the probability of occurrence of a given species based on observed presence and absence locations as well as environmental and climatic covariates. Thus, in order to account for changes in habitat suitability due to climate change, we used SDM to generate continuous surfaces of species occurrence probabilities. These data were imported into ST-Sim, an STSM platform, where they dictated the probability of each cell transitioning between alternate potential vegetation types at each time step. The STSM was parameterized to capture additional processes of vegetation growth and disturbance that are relevant to a keystone species in the Greater Yellowstone Ecosystem—whitebark pine (Pinus albicaulis). We compared historical model runs against historical observations of whitebark pine and a key disturbance agent (mountain pine beetle, Dendroctonus ponderosae), and then projected the simulation into the future. Using this combination of correlative and stochastic simulation models, we were able to reproduce historical observations and identify key data gaps. Results indicated that SDMs and STSMs are complementary tools, and combining them is an effective way to account for the anticipated impacts of climate change, biotic interactions, and disturbances, while also allowing for the exploration of management options.