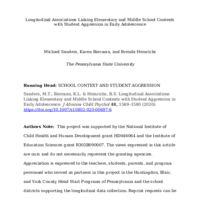 Growing up in poverty increases youth risk for developing aggressive behavior problems which, in turn, are associated with a host of problematic outcomes, including school drop-out, substance use, mental health problems, and delinquency. In part, this may be due to exposure to adverse school contexts that create socialization influences supporting aggression. In the current study, 356 children from low-income families (58% White, 17% Latinx, 25% Black; 54% girls) were followed from preschool through seventh grade. Longitudinal data included measures of the school-level contexts experienced by study participants during their elementary and middle school years, including school levels of poverty (percentage of students receiving free or reduced-price lunch) and academic achievement (percentage of students scoring below the basic proficiency level on state achievement tests). Regression analyses suggested little impact of these school-level contexts on teacher or parent ratings of aggression in fifth grade, controlling for child baseline aggression and demographics. In contrast, school-level contexts had significant effects on child aggression in seventh grade with unique contributions by school-level achievement, controlling for child fifth grade aggression and elementary school contexts along with baseline covariates. These effects were robust across teacher and parent ratings. Findings are discussed in terms of understanding the school-based socialization of aggressive behavior and implications for educational policy and prevention programming.