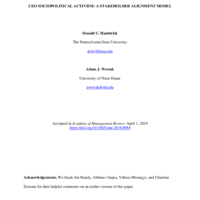 Conventional wisdom holds that CEOs should avoid wading into society’s debates. Yet, CEOs are increasingly ignoring this dictum and taking public stances on socially contentious issues. We address this relatively unexplored but important phenomenon by developing a theory of CEO sociopolitical activism. Our stakeholder alignment model posits that CEO activism stems foremost from a CEO’s personal values but is facilitated (or suppressed) by the CEO’s expectation of support from stakeholders, particularly employees and customers. We also highlight the importance of CEO power, celebrity, and narcissism in influencing whether, and how vividly, the CEO’s values manifest in activism. Then, following an episode of CEO activism, stakeholders psychologically respond to the leader’s action. Those who were ex ante predisposed toward the CEO’s public stance will feel pride in their affiliation with the company, and will consequently experience heightened identification with the firm and with the CEO’s stance. Stakeholders who were ex ante averse to the CEO’s stance will experience diminished identification with the firm, and their oppositional stance will be further cemented. Finally, we juxtapose CEO activism with other society-oriented firm practices (e.g., corporate social responsibility and corporate lobbying) and develop propositions about their independent and joint effects on stakeholder identification.