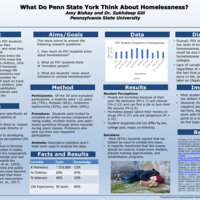 What Do Penn State York Think About Homelessness?

Success of a nation depends on the collective flourishing of the whole population. As Gandhi said, “A nation’s greatness is measured by how it treats its weakest members”. Since 2008, the rate of homelessness in the U.S. has increased by 61% and an estimated 13,000 U.S. individuals experiencing homelessness die every year (Smiljanic, 2021). Caring for this segment of the population depends on policies that are shaped by how we, as a society, view such hardships. Therefore, this study aimed to explore Penn State York (PSY) students’ knowledge and perceptions of people facing homelessness, as well as their ideas for combatting it. We collected data from thirty-one students using online surveys in Spring 2021. Overall analyses revealed that students had limited knowledge about the prevalence of homelessness (13% correct responses). Similarly, 47% knew the estimated number of children and veterans (20%) experiencing homelessness. A majority (80%) knew about the low life expectancy rates for homeless individuals. On average, students reported that people are homeless because of poor decisions (M = 2.7) and can find jobs and change their lives (M = 2.5). A majority of students (87%) noted that taxpayer dollars should be used to help this group. Respondents suggested several strategies to help them including more shelters, jobs and job training opportunities, and rehabilitation programs responsive to their specific needs. There were no differences in student perceptions based on sex, year in college, major, ethnicity, or annual household income.